Sanoor cashew was started in 1981 by Managing partner Shri N.Ganesh Kamath at Sanoor village, Karkala Taluk, 55 Km from Mangalore having Airport, Seaport & Railway Station. Our journey way back in the 1981’s. we have evolved into being one of the frontrunners in the cashew, cashew nut shell liquid extracting, cardanol, friction Dust ,Polymerised Liquid Resin , Phenalkamine Epoxy Hardner & allied cashew product manufacturing. We are the processors of Raw Cashew to Cashew Kernels, and the manufacture of Cashew Nut shell liquid, Cardanol (single & double distilled), Polymerized CNSL for Brake Lining Industry. We are ISO 9001:2015 Certified Company and also importers of Raw material & exports of our products.

N Ganesh Kamath laid the foundation for the establishment of a cashew processing unit in Karkala in the year 1981. He played a vital role in setting up processes for tackling any turbulence in the industry and ensured the prevalence of a persistent and consistent business environment .He set the roots strong enough for our industry to sustain and survive for the last 35years and still going strong .He pursued Mechanical Engineering from MIT, Manipal.

In 1987, we were awarded Presidents award New Delhi for the business achievement strict adherence to business ether and values.

It is the Portuguese who brought the wonder nut “Cashew”. The cashew tree slowly but steadily steamed it roots deep into the whole coastal region bringing new platform to the coastal business. Today cashew crop has spreads all over India and considered to be one of the popular crops.

It is a short, stocky, low-spreading, ever-green tropical tree. It flowers once a year, between the months of November and January. The fruit ripens fully within 2 months. The tree is chiefly important for the nuts it produces, but its wood can be used for a variety of purposes. It’s bark releases a thick liquid which can be used as an adhesive.

Cashewnut — A fascinating sight of nature

The nut, shaped like a large, thick bean, is sometimes more than 2.5 centimeters (one inch) long, and forms in an unusual way. The nuttiest feature of Cashewnut is that it is attached to the lower portion of the cashew apple which looks like a fruit, but in reality it is the enlarged stem of the cashew tree. The Cashewnut can be seen sitting smugly under the soft belly of the cashew’ apple. Together, it is one of the fascinating sights of nature.

The Cashewnut seed has within itself a whole kernel and this delicate kernel is covered by a test a membrane and a thick outer shell which effectively protects the tasty kernel from the ravages of nature from the time of harvesting to processing.
In its raw form, the cashew kernel is soft, white and meaty. When roasted it changes colour and taste. The cashew kernel turns from a creamy white into a golden hue and the mellow pulp becomes crisp. Salted, it appeals to the palate as the most delicious nut. 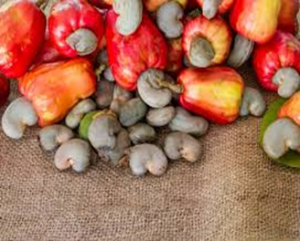